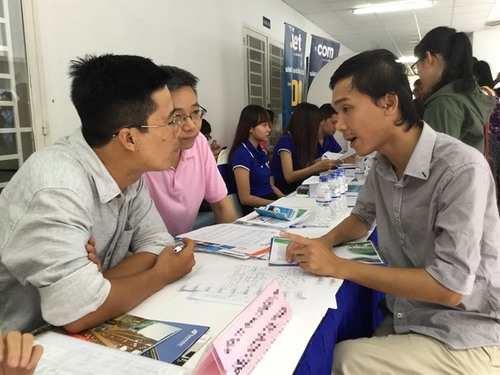 HCM CITY— Việt Nam has abundant labour resources but many enterprises in the country say they cannot recruit a sufficient number of skilled workers, and as a result, cannot expand production activities.

Nguyễn Phương Mai, managing director of Navigos Search, which offers consulting and aptitude tests, said there was a mismatch between the level of skills and demand from employers “because of a shortage of quality candidates”.

A report from the Navigos Group, which owns Navigos Search and VietnamWorks, an online recruitment portal, showed that 41 per cent of employers had not been able to recruit a sufficient number of qualified candidates.

In the first quarter of the year, the number of candidates seeking jobs rose by 40 per cent, compared to the same period last year.

One of the reasons was more foreign direct invested enterprises have been set up in Việt Nam in recent years, according to Mai.

The conversion trend towards the fourth industrial revolution in different fields, especially in manufacturing and IT, has created many new occupations in the job market, including engineers for data analysis and artificial intelligence and blockchain applications.

“The appearance of new occupations has caused Vietnamese to lag behind employers’demands,” Mai said.

Chris Harvey, CEO of ITviec.com, an IT recruiter in Việt Nam, said: "According to our latest surveys, many tech employers find it challenging to recruit IT staff who have an appropriate level of English as well as problem-solving skills. Meanwhile, a significant number of IT engineers have also mentioned that a low level of English proficiency and limited experience has caused them to be unqualified for the jobs."

Trần Văn Hùng of the Việt Nam National University of Forestry told the Việt Nam News Agency that many companies in HCM City still could not recruit enough qualified candidates.

Many experts are concerned about the labour-skills shortage because the city has poured a lot of money into high-tech industries.

Professor Vũ Đình Thành, rector of HCM City University of Technology, said that many universities, colleges and vocational schools were offering the same training courses and not dividing them into different training levels to meet the employers’ different demands.

Dr Lê Kim Dung, head of the Department of Employment under Ministry of Labour, Invalids, and Social Affairs, said the database on the employment market was not complete, and remained unconnected between provinces and cities.

This has caused inadequate analysis and forecasts about the labour market, affecting socio-economic policies, he added.

Dung said the Government should enhance public-private partnerships and carry out projects related to the labour market.

On the other hand, companies should provide information about their demands to schools to improve the quality and effectiveness of training, she said, adding that they should also have better brandname strategies.

They should also work with companies to offer their students soft skills and creative thinking skills, she said.

Harvey of ITviec.com said that students should spend time improving their English skills and gain practical experience even before graduation. — VNS