Opinions from non-managerial candidates: The gap between genders regarding wages, rewards and benefits still exists.

Gender equality in enterprises is taken differently at different respondents who have working experience but not yet becoming managers. In terms of recruitment, 54% of surveyed candidates told us that their companies had fair recruitment policies regarding gender. Nearly a half left (42%) said that companies did not have fair recruitment policies, or they did not know that such a policy existed. 39% of male candidates thought that the only reason for their job offers was because of their sex. Meanwhile, 19% of women thought that they were rejected just because they were female.

When asked whether or not there was equal pay and fair rewards between men and women with equivalent qualifications and experience, women recognize the disparity more clearly than men do. 54% of female candidates agreed on the existence of gender equality while 74% of their male counterparts shared the same thought. 40% of female candidates let us know that no equality exists at all and they are not sure about being fairly treated on the payments as well as rewards, compared to 22% of male employees having the same point of view.

However, those candidates also shared that female employees are getting more and more opportunities to hold managerial positions. More than 40% of candidates shared that their female colleagues who held mid-level management positions (e.g. team leader) to C-level (e.g. CEO) accounted for over 30% of their organizations.

Managerial candidates’ perspective: Most of the surveyed enterprises have not had policies facilitating female managers’ development. 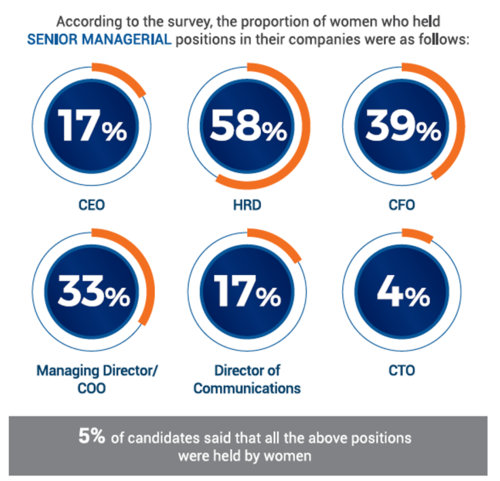 Candidates’ perspective also shows that the most difficulties in training a female manager are the lack of empowerment and executives’ consultancy, the inadequacy of work-life balance policies and training policies for female leaders.

These invisible barriers cause female leaders to become worried and stressed, particularly opposition from their leaders (disclosed by 17% of candidates); lack of empowerment (16%) and a shortage of support and understanding from their families (15%).

However, resistances and challenges above cannot hinder women from elite female leaders. When asked about the objectives of women when moving up to managerial positions, 71% of surveyed candidates shared that it was because they were passionate about their work, 65% said they wanted to prove their ability, and 54% said  they wanted to develop people.

Gender diversity is thought to play a critical role in enterprises’ development. 50% of candidates thought that gender diversity assisted in problem solving; 41% said that this would help serve more diverse types of clients; and 26% shared that it proved better in talent acquisition and retention.

Ms. Nguyen Phuong Mai, Managing Director of Navigos Search, said: ‘Companies should outline gender diversity in their operational strategies to maximize the power of their employees and managers. Although there are certain difficulties executing gender diversity policies, companies can implement the following strategies immediately, such as healthcare support and work-life balance policies, coaching and particularly ensuring the equal evaluation and fair advancement of both genders.’