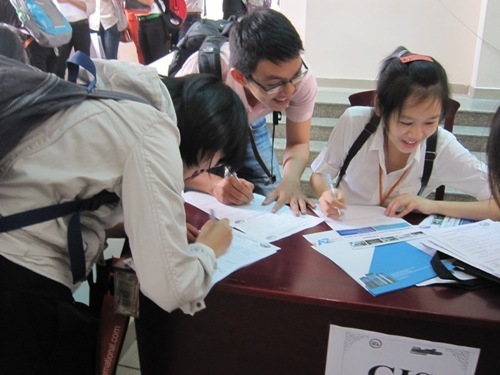 As Vietnam’s private sector is booming, millennials refuse to settle for an OK job. They want more.

Since starting her first job as a copywriter in communications agency Youth Media nearly three years ago, Bui Quynh Trang has switched jobs three times. She has been working as a freelance videographer for about eight months now. Her stint at her previous employer lasted only nine months.

The 24-year-old was with her first job for more than a year, before she decided to quit with no alternative lined up.

As the Vietnamese economy is expanding fast, switching jobs for better conditions has become more and more common, with the trend being led by millennials.

According to a survey conducted on more than 3,000 Vietnamese born between 1980-1996 by recruitment firm Navigos Group last August, over two- thirds of respondents said they were considering switching to a new job, while 70 percent said they stay with any given company for no more than four years on average.

“There is always a risk of failure. But you can’t get what you want if you don’t try,” said Nguyen Minh Phuong, 26, who found a new job with a local newspaper after leaving her previous employer at the end of last year.

“It was a huge decision for me,” said Phuong. But she thought switching to a new employer was vital to advancing her career. Her pay also increased 30 percent.

The job-hopping trend among millennials goes against the traditional work culture in Vietnam, where state-owned enterprises hire graduates and employ them until they retire. The job-for-life system has given way with a private sector boom, which has made the labor market more competitive.

Now, the only people who are generally granted job security for life are public servants.

Many millennials quit their jobs to start their own business, Nguyen Phuong Mai, managing director of recruitment firm Navigos Search, said. Nearly two-thirds of employed millennials said they want to start up in the next three years, according to the company’s survey.

This especially rings with millennials, many of whom actively look for new jobs offering a bigger paycheck, rather than waiting for their slice of the pie as their seniors did.

“Many millennials are less patient than prior generations. They want everything now,” Harvey said. “Studies show that people who change jobs every two years or so earn much higher salaries than people who stay in the same job for many years.”

Echoing him, Mai said: “Compared with older generations, Generation Y (millennials) was born into a more materially satisfying life. For them, a salary not only serves as a means to afford daily necessities, but also helps them in asserting their own worth, enabling them to enjoy life more and feel more at ease when their financial capacity is strong.”

Many young people also leave their jobs simply because they want to have certain "breaks" so that they could focus on what is meaningful to them, such as taking care of their family and pursuing their dreams, personal hobbies and travel, she added. “For generation Y, personal freedom and pay are the key factors at play when they consider switching to a new job.”

The trend may, however, destabilize companies and harm their long-term growth, some experts said.

“It's normal for a young person to change jobs. However, it's a problem when millennials hop jobs every six months or even sooner. It's not enough time for them to learn anything, and it's very disruptive to employers,” Harvey said.

“Every day, I see IT professionals who are changing jobs too fast. Sometimes, it's after just a few months,” he said.

Some employers are so desperate they hire these people anyway. But prestigious employers look for more stability. If a person has had two or more jobs in less than a year they become less employable, he warned. “Millennials are hurting themselves when they jump too fast.”

Despite the warning, many millennials are unfazed.

“There are millions of job opportunities here. So, why settle too quickly with a job that does not satisfy you?” Trang said.