“Critical issues in banking workforce – Perspective from candidates and employers”

Average salary of bank employees is from VND10 – 30 million/month, surveyed banks still find it difficult to recruit and retain people

According to the survey, up to 89% of the surveyed banks have an average salary ranging from VND10,000,000 – 30,000,000 per month. 26% of employers said that uncompetitive wages and remuneration are the biggest recruitment obstacle. 37% of employers also said that in order to increase the efficiency of recruitment, banks should consider offering financial incentives to attract candidates. 56% of surveyed banks said they had basic and reasonable policies for employees, but the policies could be more diversified to attract employees.

78% of surveyed employers said that in order to retain talented people, they need to adopt a clear promotion path policy for their employees. However, on the candidates’ side, 52% said their promotion opportunities are limited due to very few changes in managerial positions and banks often recruit new employees for managerial vacancies.

In addition, 37% of employers are considering financial incentives to attract candidates. On the candidates’ side, there are three compensation policies besides basic salary that they consider to be the most attractive: Low interest rate loans (53%); bonus (mid-term bonus, term bonus, 13th month salary) (47%); health insurance and life insurance (45%).

This survey demonstrates that boards of directors are determined to build a corporate culture. 80% of surveyed employers said their leaders do not have only macro policies but also specific actions to spread this culture across their organizations. 52% of candidates agreed with this opinion. 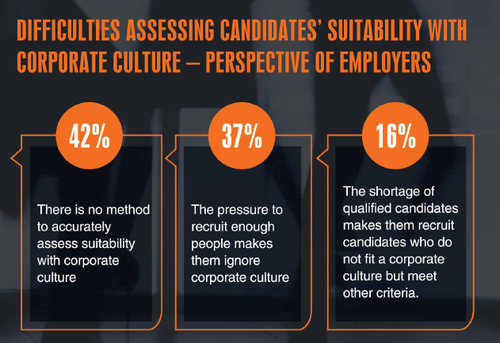 According to employers, in order to increase recruitment effectiveness, they need a set of questionnaires designed for cultural assessment (42%) and clear criteria to evaluate the attitude of the candidates (21%), as well as specific tests (16%).

Surveyed candidates would like to work for foreign banks