Japanese companies in Vietnam are seeking more personnel, especially at the managerial level, as investment from Japan has risen greatly in recent years. 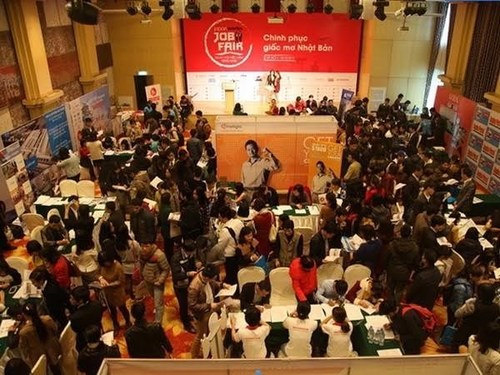 Japan ranked first in total investment in Vietnam last year among 115 countries and territories, with 9.11 billion USD, accounting for 25.4 percent of the country’s foreign investment capital, according to the Ministry of Planning and Investment’s Foreign Investment Agency. The website japan.vietnamworks.com has nearly 300 job openings, including assistant director, translators, front-end developers and ICT sale managers at Japanese companies operating in the country. The salaries for the positions range from 300 USD to 4,000 USD a month. The CareerLink website has nearly 600 job openings for Japanese companies nationwide. A report from the Navigos Group released recently said that recruitment demand for mid- and high-level personnel for Japanese enterprises last year was mostly in the manufacturing and information technology sectors. The Navigos Group, a leading recruitment company in Vietnam, includes VietnamWorks, an online recruitment portal; Navigos Search, an executive search firm; and PRIMUS, a career platform for senior-level candidates. According to Navigos Search, Japanese companies are facing competition from other foreign companies in attracting and retaining personnel. According to statistics from the Foreign Investment Agency at the Ministry of Planning and Investment, 125 countries and territories had investment projects operating in Vietnam as of December last year. The report forecasts that Japanese companies in the manufacturing sector will continue to have demand for mid- and high-level personnel due to the emergence of new industrial parks and large investments from Japanese manufacturing companies in the country’s northern region in 2018. In the country’s southern region, the recruitment demand for the IT industry and services industry is forecast to grow, according to the report. In the retail sector, mergers and acquisitions continue to occur, especially among large corporations from Japan and Thailand that have invested in Vietnamese businesses that have well-known brands. These deals have opened up new jobs in business development and have created new opportunities for Vietnamese employees to approach a more professional working style and management. However, despite the opportunities, Vietnamese candidates face certain difficulties in adapting to the corporate culture and working style, according to the Navigos report. At a forum held last December 14 by the Saigon Times Group in co-operation with ManpowerGroup Vietnam, Nguyen Thi Ngoc Hue, head of the human resource division at Japanese company AEON Vietnam Co Ltd, said that recruiting employees in the retail sector was difficult because many people do not work on weekends or holidays, especially during the Tet holiday, and many companies must compete for candidates as the sector has boomed.